A by-product of dry etching oxide is a thin film of organic material referred to as a polymer.  The polymer should be stripped away during photoresist removal (or by a separate cleaning step).  Failure to remove all the polymer can result in open or high resistance contacts and vias.

Example #1: Open Vias
Wafers from a 0.8 µm, two layer metal process were found to have open metal 1 to metal 2 via chains at parametric test.

Analysis
1. Curve tracer testing confirmed an electrically open via chain.
2. Because several faulty wafers were available for examination, one wafer was immediately selected for cross sectioning through a random portion of the via chain.

Figure (1)  This cross section shows one interconnection, or via, between metal 1 and metal 2 in an aluminum/TiN metallization system.  A film of polymer located at the upper left edge of the via blocked deposition of metal into the via.  As a result, the metal is discontinuous along the left edge of the via. 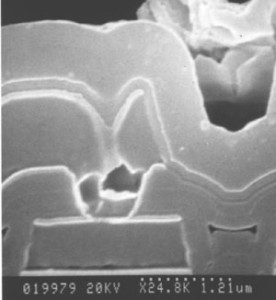 Figure (2)  Another via in the contact chain shows smaller pieces of polymer along both edges.  A void completely breaks metal 2 continuity.  (In this process, no barrier metal exists under metal 2 aluminum.)

3. Cross sections show that etch polymers can cause open metallization or high resistance vias in 1.2 micron or larger geometry.  Etch polymers are a reliability hazard in moisture because the topology created may not be sealed by the final passivation layer. 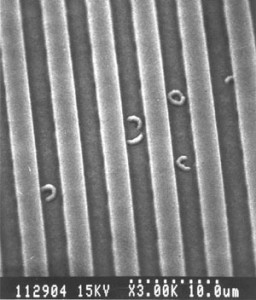 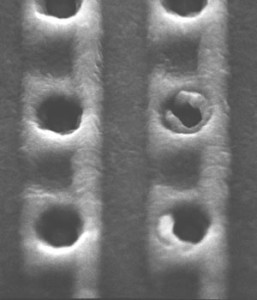